A couple members of WRDR, Braden McClintock and Amy Vicioso participated the the Walk to End Alzheimer’s on October 7th 2017. Also joining Braden and Amy were Jessica Thompson, Patricia McClintock, Daniel Bruns and Mallory Bruns. Everyone had a great time, especially for such a great cause. 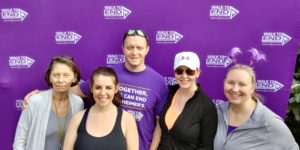 WRDR’s Feets of Fury became more in touch with Mother Nature this weekend. The group went hiking at the beautiful Starved Rock state park. The group hiked from the Visitor Center to the St. Louis Canyon, a 3 mile hike round trip. The group also saw three other canyons along the hike. Enjoy the photos of the group and the beautiful scenery.

WRDR celebrated its 60th anniversary on August 31st 2017. The event was a great success in which WRDR received 2 proclamations from the Illinois House of Representatives, presented by Representative Natalie Manley, and the Illinois Senate, presented by Senator Pat McGuire, congratulating WRDR on 60 years of outstanding service to the Illinois communities. A special thanks to the Joliet Region Chamber of Commerce for assisting in the party. Enjoy some photos of the fun filled event and cheers to 60 more years.

Feets of Fury was back at it again. On August 12th WRDR staff and some of their family members participated and conquered the Warrior Dash at Dollinger Farm in Channahon. Enjoy some photos from the muddy event. Also a big shout out to Jessica Thompson and Patricia McClintock for being our cheering squad and watching all the participants stuff while running the race. Their time was greatly appreciated.

As part of WRDR’s Feets of Fury Wellness Group, WRDR staff and their families participated in the Joliet Park District’s Sundowner 5K run, which was hosted at Pilcher Park on July 20th 2017. Although the day was warm, everybody did a great job and completed the whole run, but more importantly everybody had a great time. Enjoy a couple of photos from the event.

The whole WRDR team celebrated the retirement of the firm’s bookkeeper, Lois Laken, after 45 years of service with WRDR. The retirement luncheon was held at Syl’s restaurant where many stories and memories were shared. WRDR would like to thank Lois for all her hard work and wish her a relaxing and restful retirement. God willing.

Click the link below to view pictures of the event.